It takes a lot of effort to create a visual novel (speaking from experience), and most of the time the ones that come out from Indie studios don’t work out. Icebound, developed by Fastermind Games, has thankfully avoided this by creating an intriguing story inside a world of mystery and interesting characters. Icebound is a dark fantasy visual novel that takes place in the world of Permia, a world that is primarily covered in ice due to a disaster that happened long ago. You play as Dougal, a wandering alchemist, who arrives in the town of Isenbarr with his familiar, Isaac, in order find work and earn coin. However, he gets caught up in the mysteries of the town that center around a famous alchemist, a monster, and various other characters who all have their own secrets, including a secret agent from the Holy Empire. Dougal will have to make the right choices that not only will decide his fate, but maybe the world’s as well.

The world of Permia is one of mystery and fantasy, but not in the typical D&D way. Taking some inspiration from steampunk settings, the world is divided between the technologically advance humans of the Holy Empire and the nature dwelling mystical Ferans, a race of animal-like people. Naturally, these two races do not get along for the most part, and war seems to be brewing between them. Having a world completely covered by ice, with an interesting backstory detailing a goddess, demons, and war, certainly adds a mystery element to the game as you slowly discover how such a world came to be. The fantasy element comes in the only magic in the game known as Alchemy. Alchemy is used to create, generate, and unleash elements such as fire, water, wind, and so forth; there are even forbidden elements of Alchemy like soul power. Combined with technology, you have a world that teeters between science and magic and is divided by racial and religious ideals. The world is unique and mysterious – urging you to keep playing to see what else you can solve. It also helps that the game provides a dossier that updates over time to let you learn about certain terms or events in the world’s history. 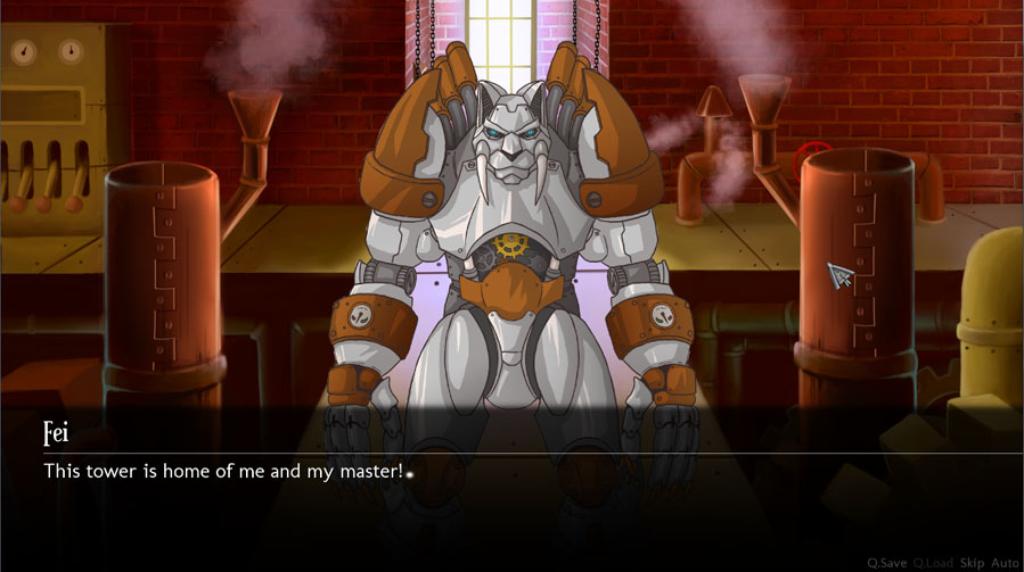 The most important aspect of any visual novel game is the story and characters. Your main character, Dougel, remembers performing a dangerous experiment long ago, but nothing more before that.  Your familiar, Isaac, helps you with your adventures and provides witty banter.  Upon arriving at Isenbarr, you are quickly dragged into events that force you to compete in a contest held by a mysterious, and famous, alchemist named Megistus. He orders you, and three other alchemists, to defeat a monster that has been plaguing the town. To make matters complicated, an Imperial Agent, named Lamia, has Dougel spy on your fellow competitors as well as Megistus and his robot assistant, Fei. It then becomes a choice of who do you trust and who do you help? There is no denying that a great mystery is afoot in Isenbarr such as: the monster, Megitus himself, Lamia’s mission, and the reason why all these alchemists have gathered in such an isolated town. Complete with a set of interesting and well-written characters you’ll find yourself engaged in a long story with unique twists and turns that can result in a verity of endings.

In terms of art, there is a clash of art styles. While it may not be noticeable at first, you’ll find that characters, backgrounds, and unique art scenes have different styles that range from simple and blurry to downright detailed and beautiful. This isn’t to say that the art is bad, most of the time it’s very good. However, there doesn’t seemed to be a consistency in the art style. Some characters look too basic and given a simple rough design in some areas, while others are fully detailed and given plenty of attention. There may be a future update to correct this, but there are notable times when the art style just doesn’t feel completely right. Thankfully, most of the time the artwork is just fine as it is. The various Feran characters deserve the most praise due to how well drawn with their fur and clothing. While the art style’s clash moments may be a distraction, it’s not something game breaking. Fortunately, the music doesn’t have this problem as each of the tracks are very well done and deliver the perfect atmosphere for the various settings you’ll find yourself in.

Naturally, a visual novel game has a choice making system. Your choices will decide how characters view you and what paths you will take in the story. Some choices will deliver great rewards while others will resort in failure, and maybe bad endings. There is a gameplay feature that help the game stand out: the puzzle system. In the game, alchemy is performed using an alchemist kit to use the energy to cast the spell for the situation. This is done by “conductors” and “catalysts” in story, but in game it’s done by puzzle solving. You are given a set of tiles, all which have a colored symbol on it that you must place on the correct place on the board. Once you place your first tile, you must place another next to it that isn’t the same color nor can it be touching a tile of the similar color. Once all the tiles have been put in the right spots, you complete the puzzle and the story continues. You can backtrack as many times as you can with your tiles and you can change your tiles color, but are limited to how many times in this ability. If you cannot complete the puzzle you can abort, but doing so will have a consequence in the game’s story. The puzzles themselves are not too challenging, but they are fun to try and solve. Your reward for this is gaining points in Order or Chaos, which not only changes your reputation, but also allow access to unique decision choices that can have better outcomes, like the Paragon and Renegade system in Mass Effect.

I find Icebound to be a very engaging visual novel where you want to know more about the world and the mystery that comes with it. With a mostly great art style, great music, interesting characters, and pretty good puzzles I recommend this game. I give Icebound a 9 out of 10.