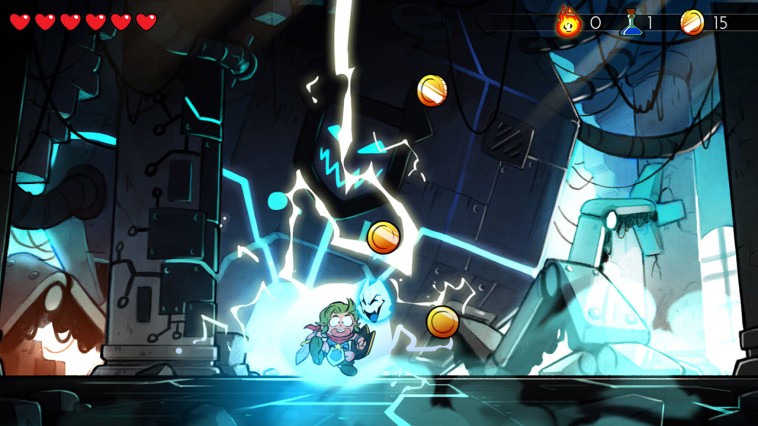 Despite being someone who deeply enjoyed the 8-bit era of my youth, the entirety of the Wonder Boy series managed to elude my grasp. It’s not that I was purposely avoiding them or thought they would be terrible, it just simply never rotated into my gaming sphere. Nintendo kids tend to stick to their own. I was a bit intrigued, therefore, to find out that nearly every game in the series has been ported, in some fashion, to modern systems, from Wiiware virtual consoles to PS3 and XB360 online exclusives. So when one of them got slated for a full remaster with a Nintendo Switch version, I had to bite and find out what was going on. And I’m really, really glad I did.

Wonder Boy: The Dragon’s Trap is a completely overhauled and spruced up version of the game by the same name originally released in 1988. The concept is that our titular hero has confronted his arch nemesis, Mecha Dragon, only to get cursed and turned into a monster. Wonder Boy now has to find something called the Salamander Cross in order to turn back into his old self, but, naturally, that’s not readily available. As you journey across multiple lands, you get hit with different curse variations that cause you to change form again and again. You start as a lizard, move into a mouse, then a piranha, a lion and finally a hawk before becoming human once more. This sounds like a lot, but I assure you the entire game can be beaten, satisfactorily, in one long afternoon.

I’ll start with the negative, because why not get that out of the way early? This is a through-and-through remake of a game that was born out of a truly difficult and unforgiving era. The controls are tight but very finicky to not give you any extra bounce or wiggle room when you need it. You’ll miss platforms by pixels. A monster can be outside your strike by an invisible margin. You need to grind if you want to upgrade to the best items that money can buy, and, trust me, you do. Wonder Boy will lull you into a false sense of security by making it feel almost too easily to smash all the little baddies that run around, and then you’ll end up in a boss fight that will completely work you over. And if/when you die, you might start much further back than you’d like. Should you decide to suspend your game because life happens and your Switch needs to sleep, you’ll get punted back to the town where you started, and it can be a serious chore to make your way back. If you’re not used to games being bastards, you may quit Wonder Boy out of sheer frustration. I highly recommend you do no, because that was the end of my complaints. Wonder Boy: The Dragon’s Trap is incredibly novel and rewarding in the way it unfolds. Every time you change forms, you need to find a new way to play. The lizard you start with had such a nice attack range, and you then get slotted into a tiny mouse with no strike whatsoever, BUT he can climb walls! You keep your equipment but lose your hearts, so you need to figure out your new strategy fast. Walking underwater was a chore before, but swimming around as a piranha allows you to reach new areas you vaguely recall seeing earlier when you were just a rodent. I loved the fact that the game was changing around me, yet I was still in a familiar area, helping to ground constant moments with new and exciting differences. Best of all, the grinding that I mentioned earlier does pay off; having cash ready to buy brand new armor and weapons as soon as you poly-morph enables a slight bit of reprieve and severely boosts confidence, even if you might still die just as fast.

The biggest sell point for Wonder Boy has got to be the art style. I have not played a game that evokes such a feeling of “pretty” as Wonder Boy has, and I have played a fair number of Switch titles at this point. The art has a feeling of love draped over every single moment within the game. I have no idea what compelled Lizardcube to strive for this level of attention to detail, but I don’t think I received this level of adoration from my own parents. The animation is smooth and speckled with little moments that someone said “this is for me.” When the lizard man ducks, he wraps his tail around himself in an almost protective way. The monsters all have a different level of shock etched on their faces when I hit them. It feels like I’m watching a Western inspired anime unfolding before me, and I have the good fortune to pilot and direct every second of story line. If you aren’t impressed with how the game looks, you aren’t giving yourself the proper moment to digest what’s before you. Do yourself a favor and like the ZR button; the game’s graphics will automatically change to how it looked in the original version, back on the Sega Master System, just about 29 years ago. It’s not even night and day, it’s whatever day looks like in Heaven and night time somewhere on Charon, Pluto’s moon. I like to toggle it on and off on occasion just to help reset my sense palette and drink in what the game truly looks like. Also, big ups to Lizardcube for allowing players to be Wonder Boy OR Wonder Girl for this version, very cool. Granted, you won’t see a lick of difference if you toggle back to the classic sprites, but I appreciate the detail for the updated graphics and, in general, giving players a choice.

As far as platformers/adventure games go, I really enjoy the way Wonder Boy: The Dragon’s Trap handles pickups and items. You get a fair number of coins from monsters, and you have the possibility to get a limited use attack item or healing heart instead. The hearts never seem to drop when you are full on health, and I can’t tell if that’s coincidence or design, but, regardless, I was pretty happy. The range attack items have their own set of uses, but the boomerang and arrow are probably the best in the bunch. You’d be surprised how many times an enemy is directly above you and the only way to take care of things is a vertical strike. And the boomerang, unlike everything else, actually can be reused time and again as long as you catch it. You know, like a boomerang! It’s such a small thing, but I was really satisfied that I had eight boomerangs at once and was dead set on not losing a single one. Fireball and cyclone are just different types of limitless range attacks, but that boomerang was my secondary weapon from the drop. The hardest pill to swallow might just be the play time. As I said earlier, you can enjoy Dragon’s Trap from start to finish in probably about six and a half hours your first time, and about five and a half or less for a second run. While that’s not terrible, people really want bang for their buck, and twenty dollars for a game with a very limited time frame is not the biggest bargain. If you are a fan of the Wonder Boy series, you were already planning to get this, knew what you were getting, and don’t begrudge the price tag. But newcomers might be severely put off and avoid this genuine experience when the also amazing Blaster Master Zero comes in at half the price and just as much (if not longer) game play.

Still, the graphics and art simply cannot be beat, and the goal to preserve and bring Wonder Boy to a modern audience was a smashing success. This is not a game to be missed, but it could easily be a game waited for. If you believe there’s a price drop to be seen during a summer sale, I would recommend holding off for just a bit. Lizardcube is getting accolades and sales across all three consoles, and we’re less than two weeks from the Steam release. Wonder Boy: The Dragon’s Trap seeks to be timeless, and I think all players owe it to themselves to find and make time to experience this fabulous tale.