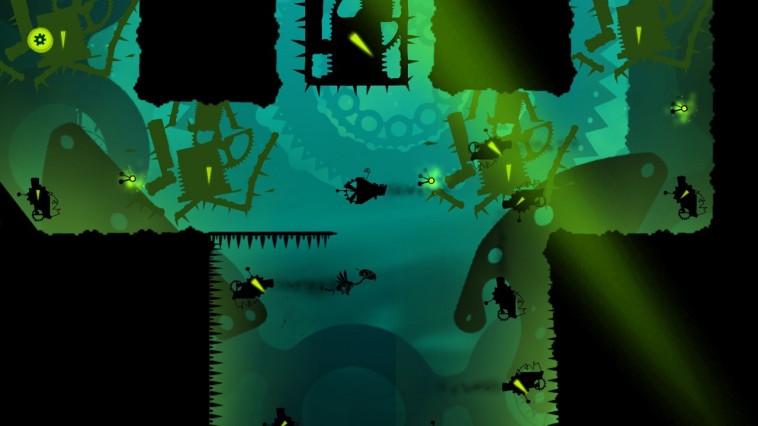 Green Game: Timeswapper is a confusing puzzle title who’s main goal is that you, some kind of mad scientist, must get a skeletal, clockwork bird to fly across a perilous stage in order to get to the glass cage at the end. Along the way, there are cogs that need to be picked up because why not, and tons of spikes and hazards that birds shouldn’t touch. Thankfully, as the title suggest, you’re able to control time! Kind of. Sort of.

The way that Green Game: Timeswapper maintains its title is through a beam of light that dictates a pseudo flow of time as it occurs. At first, time control merely means if a burst of steam is issuing from a pipe or not. The steam is your primary ally throughout this game, propelling the bird in another direction. Shortly, however, you run into other ideas and conditions that time, supposedly, dictates. For example, steam vents that will fire upon activation but the time beam decides the angle. Or walls that either are crumbled (you can fly through) or intact (you’ll crash) dependent entirely on where that beam of time light is at the moment. Eventually there are even small “time nodules” that you can pick up that’ll temporarily affect the speed of your bird, with going slower or faster being essential to making quick changes on the condition of the world so you can get everything and pull it off successfully. 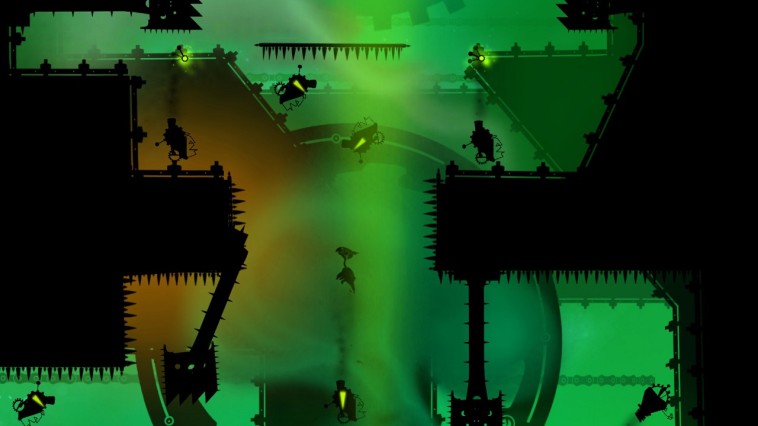 In theory, Green Game: Timeswapper is a pretty cool idea, and I did enjoy the first few levels. But, when things started getting a bit tougher, I then grew impatient and frustrated with the game. You see, for whatever reason, iFun4All, the studio behind this game, made the conscious decision to ONLY allow this game to be played in handheld mode. I get that, maybe this made more sense for them, but it also appears that, while throwing out the bathwater, they also hurled the baby because I can only use touchscreen controls. What this means is you have to do all the scrubbing of the lightbeam with your finger and, guess what, my fingers are jittery from years of abusing coffee and lack of sleep. There is a lot of fine nuance that ends up happening with aligning the time light, and some steam vents and destructible walls will only be in the right position at a very, very approximate angle. What happens, then, is you go several levels without dying once (and there’s a death counter to let you know how many birds have been sacrificed) and then you hit one stage that just DEMANDS blood. Instead of thinking “wow, this is a hard level!” I’m left with “wow, I hate this stage because of nuance.”

Even though the puzzles evolve and get progressively more complex, you don’t really see an evolution happening in Green Game: Timeswapper. Much like other puzzle games that involve birds, once you’ve seen the first ten stages you’ve basically seen everything. There will be more trying moments of precision and accuracy, and it’ll take a lot longer to successfully navigate the level and get all three gears, but the mystery and the spark is gone. After you’ve died once and sullied a perfect score, you sort of stop caring and just fling yourself into death time after time till you get it right.  It’s disenheartening, and doesn’t really drive me to do better.

Now, as far as atmosphere goes, Green Game: Timeswapper does a phenomenal job. The graphics, very green and black, paint an appropriate atmosphere that’s akin to some kind of 1960’s horror movie, if there were horror movies for birds made back then. With nothing but shadow on shadow with hints of green, some of the difficulty does come from being able to properly judge how close you are to the steam or how far those spikes actually are, but it’s mostly just my own awful gameplay. And the music, damn, I really, really enjoyed this funky, soulful backdrop to the entire game. It teleported me from this dank laboratory to something exceptionally smoky, like I was in a jazz player’s version of the afterlife. I really dug the soundtrack, and I can’t say that’s something that I often see good detail to in mobile games. 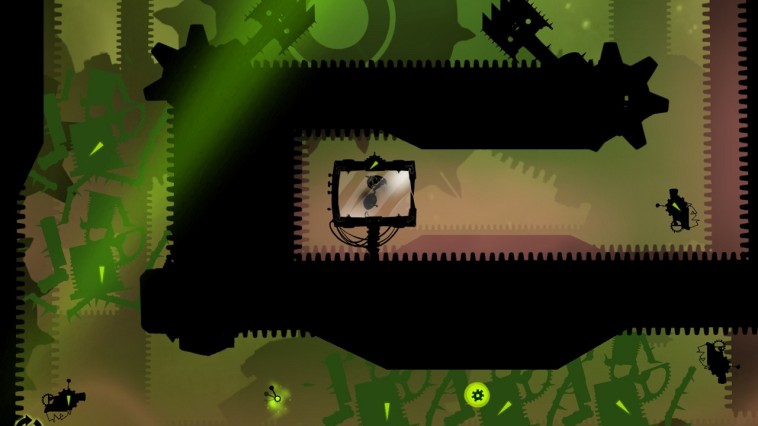 I’ll take a quick moment to compare Green Game: Timeswapper to another title on the Switch: King Oddball. While Oddball lacked some of the finesse to come across as ultra artistic, it was fun, simple and had a lot of good hooks to draw a player in. Timeswapper, on the other hand, went the extra mile with making the game feel and look cool, but it’s a damn mess to play without some kind of joystick control. With the only options to be turning off the sounds and music (and why on Earth would you do that?) I’m left with just a cool setting that can’t really be played properly.

I’m hardpressed to give Green Game: Timeswapper any proper recommendation simply because it’s not particularly fun to play. It doesn’t feel natural as a handheld Switch title and music isn’t enough to support a game that isn’t a music title. Maybe if the price is right this could be a nifty little experience, but, overall, I’d recommend saving your pennies and just getting the soundtrack.