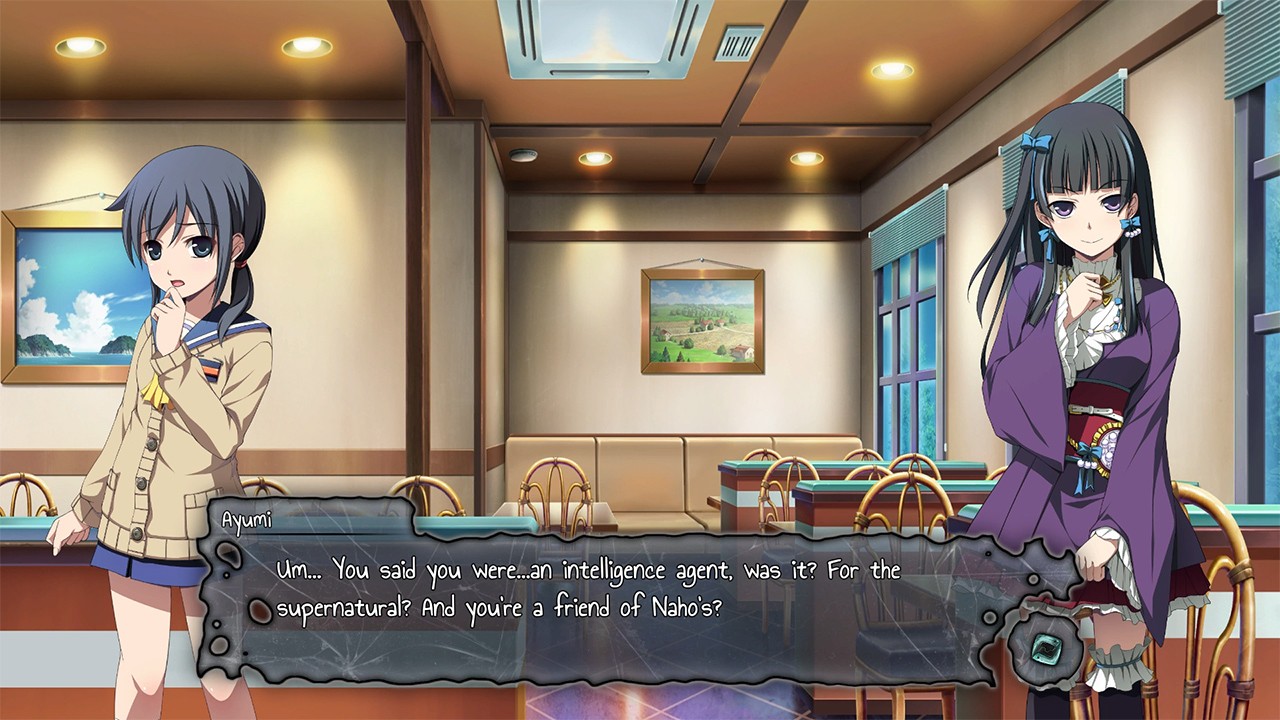 I must admit, I’m almost impressed with the brazen efforts of XSEED, Mages and 5pb as they move forward with their Switch publishing. In the past, it’s been common for publishers and developers to make an effort and push their older game onto the console before moving forward with their newest entry, especially if the games are connected. Sure, it might seem redundant, but not everyone had a Vita, a 3DS, a PS3 and a good PC a few years back, so Switch players need a chance to catch up and see what the fuss is about. But that’s not what happened here. No, if you actually care about the events of Heavenly Host Elementary, the Shinozaki family curse and all the madness of the Book of Shadows, you gotta go seek those answers out on your own, because we’re not slowing down for anything or anyone. With possibly the most number of company splash panels at a game startup that I’ve ever seen, welcome to Corpse Party: Blood Drive, the final entry into the Heavenly Host Elementary saga and possibly the last ever Corpse Party game.

Crash course in the background: Corpse Party was originally released in 1996, got a remake in 2006, got a semi-sequel in 2011 that involves time travel and repeating mistakes with only a bit of information retained from the original, and now we’re playing the Switch version of the official sequel to the 2011 game, which brings us to where we are. For Corpse Party, it boils down to kids finding a magic ritual that should make them friends forever, and it, instead, tears a hole into a horrorverse where they are all teleported. In the 2011 game (Corpse Party: Book of Shadows), a kid named Satoshi tries to talk his friends into not doing this and then they all do it anyways, and now we’re in Blood Drive. Here, we take turns making different people the lead, but a lot of time we focus on Ayumi, who is a Shinozaki and, as such, most attuned to the magical bloodline that created the parallel dimension where Heavenly Host Elementary resides. See, back in Book of Shadows, a bunch of people, including Ayumi’s big sister and her best friend, died horrible deaths, and Ayumi is living with that guilt. So when some creepy chick comes along and says there might be a way to bring them back to life, Ayumi listens to literally no one and jumps at the chance to re-enter a literal hell of psychotic makings. Please be assured that the story is actually very intricate, rife with lore and actual connections to old school Japanese mysticism, but I could write several paragraphs about that alone and it would spoil the game. Also, it would effectively ruin the first couple of hours of gameplay for you. 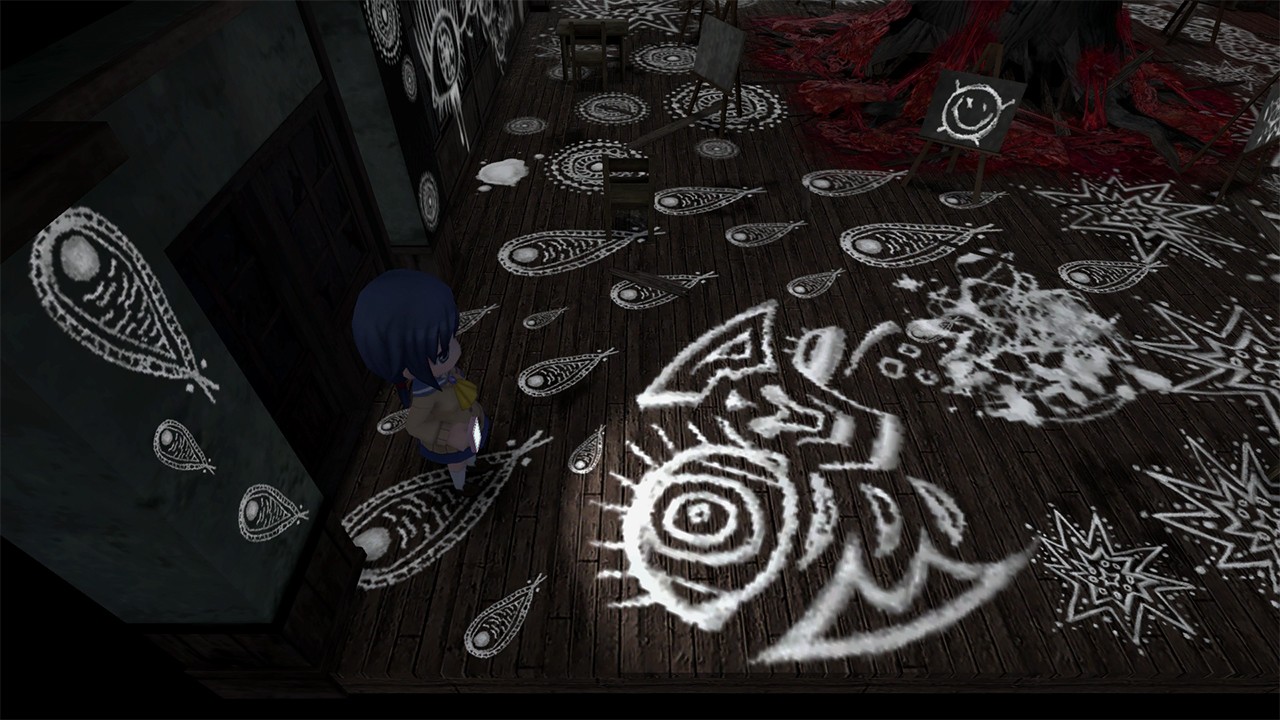 At the very beginning, Corpse Party: Blood Drive is an incredibly slow burn. Don’t get me wrong, it’s entertaining and engaging: you get some top notch voice acting along with some decent character portraits and a bit of backstory (though fragmented) about the events of Book of Shadows. The problem is…Book of Shadows wasn’t like most of the Corpse Party games. It was more visual novel than anything, which is cool but not really like the Corpse Party main game. Corpse Party: Blood Drive throws players off by introducing a 3D, almost cute rendering of characters (instead of the old school 2D, SNES sprite style of the original) and making players sit through copious amounts of dialogue as everyone shares their thoughts and opinions about what happened and what to do next. You’ll get to walk around a bit, but it’s mostly static and just serves to show that you can, someday, do cool stuff (there’s a scary apartment but you’re never really in danger). After you finally enter chapter 2, the game begins in earnest, and players can enjoy what makes Corpse Party a dope event.

Corpse Party: Blood Drive is a survival horror game that is equal parts puzzle solving, critical thinking, and running for your damn life. Splashed with plenty of exposition and the changing of hats between who is the protagonist and who is just a side character, you have the chance to see what the tragedy of surviving an event like Heavenly Host Elementary can do to multiple young people. All the action takes place in a dark dimension called Nirvana, where this cursed elementary school is located and where Ayumi and, gradually, her other classmates need to explore. The school seems to be a living entity, constantly moving things around and changing room layouts like a macabre Hogwarts, and, oh yea, murder is hiding literally everywhere. Not only is the ground laced with traps that may or may not be obvious to the human eye, there are plenty of spectres roaming the school who, conveniently, take on the visage of your school mates, departed or otherwise, and will kill you to death if you don’t escape. Taking cues from games like Clock Tower, Ayumi isn’t packing heat and is better off finding a place to hide if she wants to survive. In fact, the only thing she’s packing is a flashlight to hopefully point out where some pitfalls and traps are, and there’s optional battery life if you want to curtail your ability to survive. Awesomely, the monsters aren’t always fooled by simply disappearing from view, and finding a hiding spot too late just means getting dragged out of your hiding spot and then being consumed.

Corpse Party: Blood Drive also contains a lot of the tropes of horror visual novels, including a slew of bad endings that can come about from making poor decisions. Some are very obvious, like not stopping someone from running to a scary spot that clearly sounds like a massacre, and some are even more obvious, like not running away when a monster is killing you. The trip to finding the “true” ending and vanquishing the curse of Shinozaki once and for all is a difficult one, and usually involves you needing to experience at least a few of the bad endings before reaching the ending. It’s no small feat, and the mixture of gameplay and styles can be off-putting unless you’re dedicated to reaching the grand conclusion. Thankfully, there are just enough expositional breaks to keep the game from getting relentless in scaring you, and just enough action sequences to keep players bored from reading too much. It’s a tenuous balance, one that almost gets tipped by the inclusion of the EX-Chapters (which are a good chance to breathe and get a better insight into various characters). Still, it’s a good read as well: if you were a fan of things like Higurashi, it scratches a similar itch, albeit with a much sharper, creepier fork. 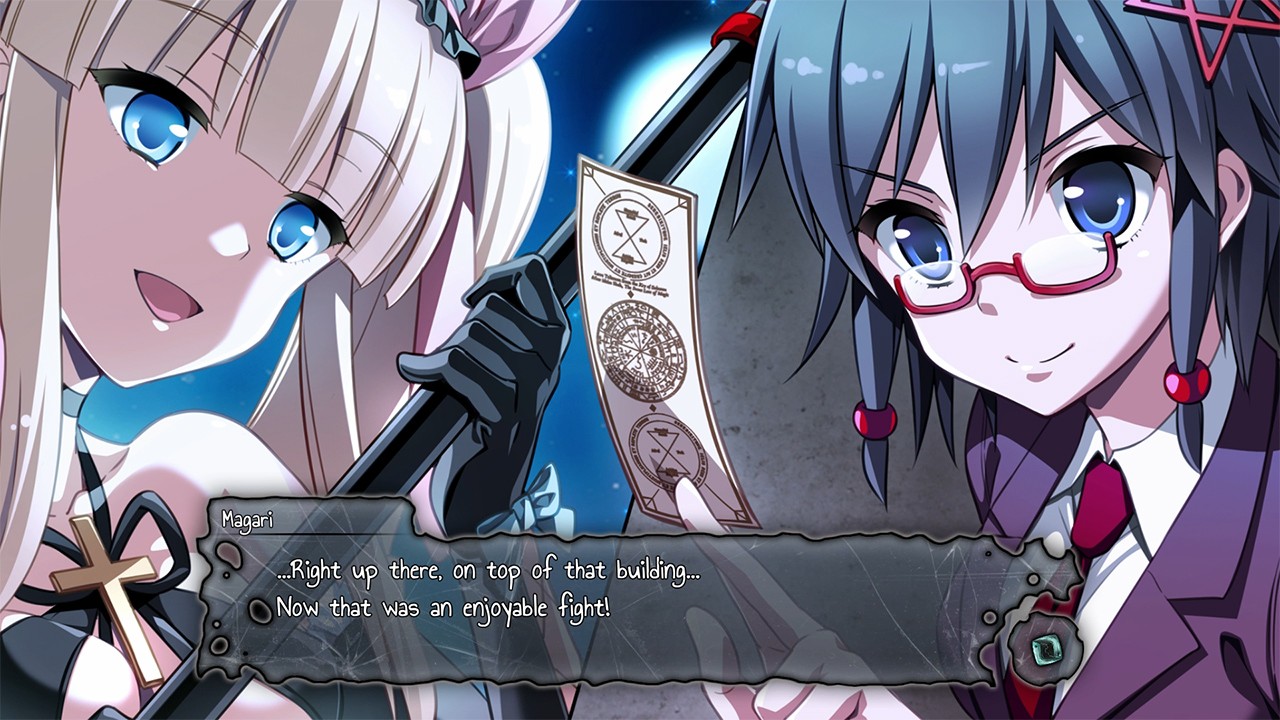 When the game hits the high notes, it really goes off the charts. Corpse Party: Blood Drive has this wonderfully relentless atmosphere within Heavenly Host Elementary, as every single corner seems to hold horror and disturbing imagery that is only compounded by the instability of it all. Finding the dead body of a former student never loses its ghoulish touch, and the likelihood of going down a hallway and suddenly hearing the change in music and the whispered groan of a being coming to kill you sets your hair on end. With the focus being something tragic and scary, the voice acting delivers some truly emotional, absolutely jarring performances of agony, sadness and terror. To be perfectly frank, if you have any triggers regarding people in pain or distress, don’t play this game, because the deliveries are magnificent. Additionally, the story unfolds like a complex, multifaceted quilt, giving you glimpses of patchwork interaction before you behold the entirety of the truth and what madness is connected therein. As soon as you’re on board, the game doesn’t disappoint in terms of storytelling.

The pacing can be slow at times, though, and the periods of exposition can feel incredibly long. In one particular chapter, it seemed that I was able to do action content for less than ten minutes, sandwiched between 20-30 minute segments of conversation that would have driven me crazy had it happened earlier in the saga. Additionally, the main game itself doesn’t have the same replay value that the older Corpse Party variations seem to possess. For whatever reason, Blood Drive has a singular value as acting as a great stopping point for the series as it exists currently. It’s a good culmination of arcs and experimental designs, as well as being packed full of additional content in a post-game sense to excite superfans. I especially loved the testimonials from the voice actors and actresses that you can listen to as you unlock them, plus creating your own disjointed and odd conversations by grabbing sound bites from different people and marrying them together at different times. Plus, you can listen to the creepy, atmospheric soundtrack anytime you’d like, though you still need to keep the screen awake in order to enjoy this (why hasn’t Nintendo offered a good solution just yet?).

All in all, Corpse Party: Blood Drive is a delightful romp through a truly spooky and often scary world. My only regret is that, unless players have been keeping up on other platforms, the full weight of what happened when the Sachiko Ever After charm was attempted will only be understood by longtime fans who’ve followed across multiple iterations. With a little luck, maybe we’ll see a Corpse Party Anthology for the Switch in the not too distant future, and then the madness, the horror and the grotesque ends can be seen in full for everyone. In the meantime, though, get a flashlight, lock your doors, and remind yourself it’s only a game. A game that’ll haunt you until daylight.

More visual novel than action game, Blood Drive gives a satisfying end to the Corpse Party saga, though it will leave newcomers scratching their heads.